Simply the best drop-in replacement for your ineffective & dull tone pot. Invisibly installs in minutes using your original knobs, without any modification to the instrument. Precisely cut treble while retaining midrange resonance and rich harmonics.

Optimize your tone before your output passes through pedalboards, direct boxes, amplifiers, or microphones. Recordings are vastly improved, and live performance tones are perfected.

100% passive analog circuitry increases the output and clarity of any guitar or bass with passive pickups. No batteries - Zero noise! Powerful and precise control of treble & mid frequencies is provided at last... and the tone pot's weak, muddy sound is completely eliminated! 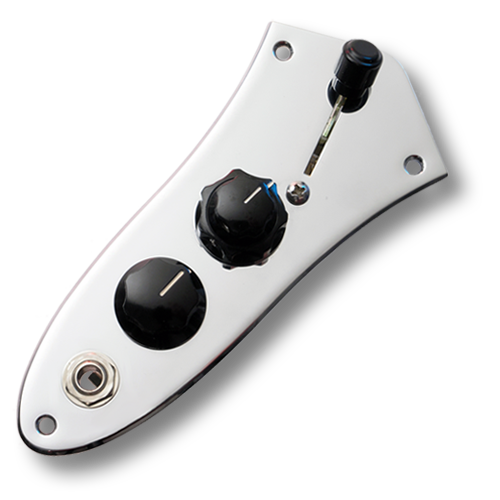 Including one ToneStyler BASS control of your choice, a "Tele-Jazz" upgrade will greatly expand the tonal range and versatility of your Fender J-Bass or clone. No modification or fitting is required.

Four unique control plans are available, with a choice of knob styles and finishes. No batteries - Zero noise!  Hand-made in the U.S.A.  Street / Retail  $132 to $207 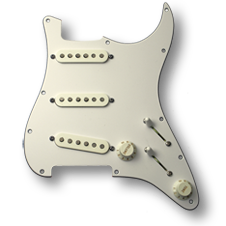 Our custom pick-guard offers a precise drop-in replacement for Fender's standard 11-hole pick-guard. By replacing the 5-way Strat switch with a 4-way series/parallel switch, and replacing the Strat's center tone knob with a second 4-way series/parallel switch, the traditional five-position Strat comes alive... with a total of thirteen useful and musical pickup combinations! Unlike Fender's S-1 switch, thin and weak "out of phase" pickup sounds are not provided!

Including one ToneStyler GUITAR control of your choice, a "4x4" upgrade will greatly expand the tonal range and versatility of your Fender Strat or clone. No modification or fitting is required.  Pickups are not included.

See the Stellartone web store to choose from a variety of pick-guard and knob colors. No batteries - Zero noise! Hand-made in the U.S.A.

Contact Us  to choose your several options for pick-guard & knob colors, plus a ToneStyler GUITAR SIX or TEN:   Street / Retail  $196 to $227 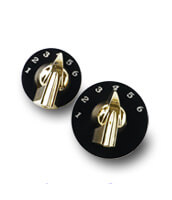 The musicality and complex character of our unique "Vari-Tone" circuit mode sets a new standard, exceeding all past and present industry efforts... including varitones installed in Gibson's ES, EB and other instruments. Unlike any varitone in existence, ours features a 15 Henry humbucking audio frequency choke with mu-metal shielding. Hobby varitones, using a tiny mic-line transformer instead of a real choke, cannot begin to compare on any level of performance.

See the Stellartone web store to choose from a variety of options. No batteries - Zero noise!  Hand-made in the U.S.A.

Contact Us with your instrument's make & model, to configure your Vari-ToneStyler kit:   Street / Retail  $328 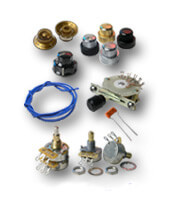 For the convenience of our customers, Stellartone stocks an assortment of name-brand electrical parts for guitars and basses: knobs, potentiometers, switches, jacks, cable, wire, tone caps, and hardware, all priced at 30% off list. Only a small number of parts are currently shown in our web store.  Until we complete our store's page detailing all of these small items, contact us with your parts request;  we'll reply with a PayPal invoice for your review, or we'll add the parts to your Stellartone order.